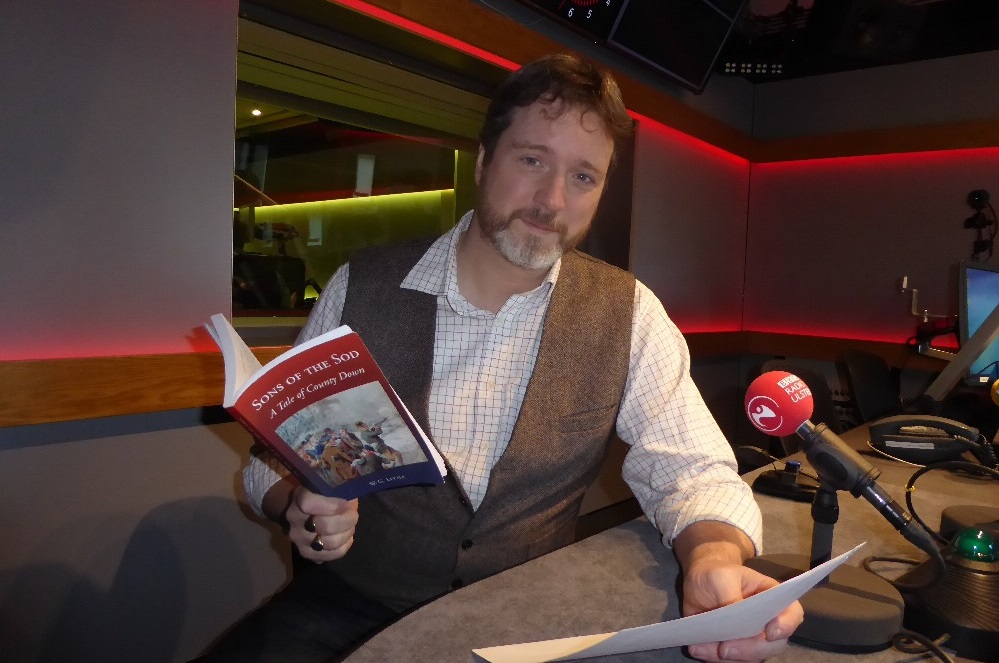 Darren Gibson is a talented writer from Northern Ireland whose work captures the rich history and distinct culture of his northern home. Gibson has worked as a broadcaster and screenwriter for fifteen years and has received NI screen’s New Writer Focus Award for his screenplay ‘bye bye blackbird’.

He grew up in the small village of Ballyfrenis in the Ards Peninsula along the stunning eastern coastline of Northern Ireland. Surrounded by Strangford Lough and the Irish Sea and just 13 miles from the coast of Scotland, this region is described as being filled with ‘Quaint Villages, pockets of history and welcoming locals’.

Gibson’s passion for the rural landscape and rich culture of the Ards Peninsula shines through in his work and allows for a unique perspective. He writes through various mediums including poetry, prose, broadcasting, short story and screenwriting. He describes himself as a visual writer and states that “there’s something about seeing your work come to life that is rewarding”.

In his screenplays ‘The Licht’, ‘Stumpy’s Brae ‘and ‘Half Hung McNaughton’, we can see Gibson’s love for the Ulster Scots dialect, northern culture and the Ards Peninsula come to life.

Gibson is inspired by the local language colour of his hometown, mentioning the specific humour, dry wit, phrasing and words used in these small peninsula communities. He often writes in Ulster Scots and wrote in Ulster Scots when he was a weekly columnist for The Belfast Newsletter from 2012 to 2014. Works such as ‘The Licht’, ‘Tha Danner’ and ‘Ae Fond Kiss’ recreate a specific sense of place whilst preserving and documenting the longstanding traditions of the Ards Peninsula and of language. In ‘Tha Danner’, Gibson writes,

The use of language creates a sense of time and place here, demonstrating a culture steeped in history. In his short story ‘The Licht’ (2014), Gibson explores the unique characteristics of the Ards Peninsula by marrying the physicality of the region with its distinct culture. ‘The Licht’ features Kilwarlin lighthouse, locally known as ‘The Auld Light’, which was the first lighthouse built in Ireland. In ‘The Licht’, Gibson describes “the stark silhouette of the abandoned South Rock lighthouse”, giving it a sense of age.

Kilwarlin lighthouse serves as an emblem and an important landmark that encapsulates the peninsulas longstanding relationship with the sea. ‘The Licht’ additionally focuses on isolated, rural communities; Gibson describes Davey’s “tweed jacket, corduroy trousers and flat cap” and how they “speak of his rural roots”. Gibson’s love of local, rural people and their stories offers an insight into alternative voices.

Gibson’s work is influenced by northern literary tradition. In a 2018 broadcasting series with the BBC titled ‘WG Lyttle and Me’, Gibson explores the work of WG Lyttle, a 19th Century novelist from County Down who wrote Betsy Grey, Sons of the Sod and Daft Eddie.

In an interview with the BBC, Gibson states that ‘WG Lyttle’s writings are what first inspired me to write […] His deep love for the people of the Ards provides continual motivation in my own writing […] I read with great joy and pride – the voices of the sons and daughters of County Down, smiling to myself because – this is my tongue, this is my place, these are my people’ (BBC, 2018). Gibson’s writing reflects this sense of cultural pride and community. He wrote his play ‘Ae fond kiss’ for young people, and ‘those still young at heart’; this play provides an accessible way for children and young people to engage with the Ulster Scots dialect and their heritage.

Gibson continues to express his love for the arts. He is currently a teacher and a Script Editor for BFI Academy, he is involved in an upcoming documentary series project with ALLEYCATS TV named ‘Afeared’ and he was Peoples Painter Winner 2019 on the BBC. Through his use of language, characterisation, storytelling, and exploration of northern culture, Gibson continues to inform and explore through his creativity. Gibson writes in his own unique style and his words offer a refreshing and alternative insight to northern literature.

Filed Under: 2020, News
The Irish Independent: How The Arts Unite Us As One