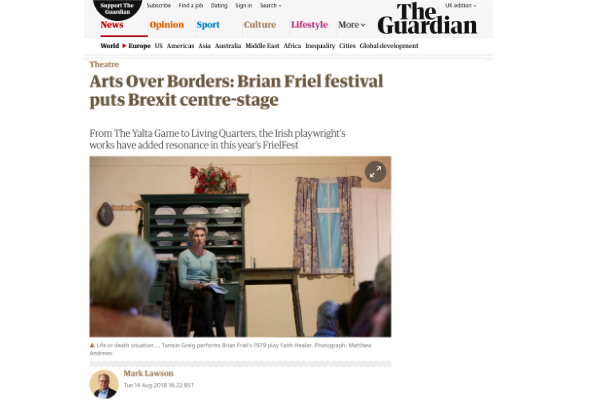 From The Yalta Game to Living Quarters, the Irish playwright’s works have added resonance in this year’s FrielFest

Although Ireland is famously cultured, it’s a shock to walk into a village hall on a Sunday evening and find posters advertising a harvest festival and, on a stage that looks more suited to panto and am-dram, Tamsin Greig.

Then, a church hall a few miles across Donegal reveals – standing between the tricolour of the Irish Republic and the yellow and white papal flag – Alex Jennings. A third hall and, later, a hotel ballroom holds the fine Irish actor Lorcan Cranitch.

As part of FrielFest, these performers are delivering the monologues that make up Faith Healer, Brian Friel’s great 1979 play, in which the life and death of the title character (played by Cranitch) are remembered by his wife, Grace (Greig), and manager, Teddy (Jennings), as well as the rakish healer himself. Two coaches, a mini-bus and numerous private vehicles move audiences between scenes, with an interval for a barbecue on Portnoo Pier.

Click here to read the full story in The Guardian